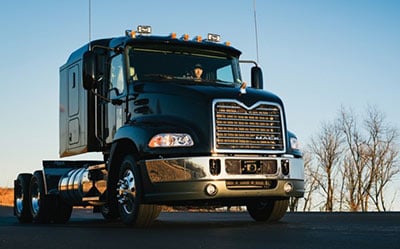 Natural gas still hasn't caught on as a fuel for private passenger vehicles, but it's finding more success in commercial applications.

The selection of natural-gas commercial vehicles is becoming wider, and using the fuel in fleets makes more sense from an environmental-impact standpoint than it does for individual cars. One company catering to this market is Mack Trucks, which announced that the natural-gas versions of its Pinnacle series trucks will get a handful of updates this year.

These include a new Eaton UltraShift Plus automated transmission and Wingman Advanced safety system.

The latter is essentially an adaptive cruise control system--commonplace in cars, but fairly new to big trucks--that can automatically keep a set following distance by reducing throttle or engaging the engine retarder and brakes. All natural-gas Mack Pinnacle models use a Cummins Westport ISX12 G engine that can run on either compressed natural gas (CNG) or liquefied natural gas (LNG).

The two fuels are somewhat different. LNG's liquid state is denser and makes it easier to transport, but CNG is generally cheaper, more widely available, and doesn't need to be kept at low temperature like LNG. Sales of natural-gas trucks have risen lately, but the economics of the trucking industry still keep them from being widely adopted.

While natural gas is typically much cheaper than diesels, the trucks themselves are more expensive to start out with--sometimes by as much as a third over a comparable diesel-powered semi tractor.