Your head gasket creates the necessary seal between the cylinder head and engine block that allows combustion to occur. A leak in your gasket can not only lead to a decrease in engine performance, but it can lead to other issues within your engine, so you'll want to address any issues right away.

It's unlikely that your head gasket will spontaneously blow. Instead, it's probably a symptom of a larger issue in your engine. Because of this, it's very important that you diagnose the exact cause of the failure to prevent further problems in your engine. If you simply replace the head gasket, you stand a good chance of not only having it blow again, but of allowing further damage to occur within the engine.

The next picture again shows an example of a gasket damaged by thermal push. The bore edge looks like it was pushed out of place, a telltale sign of this kind of failure. 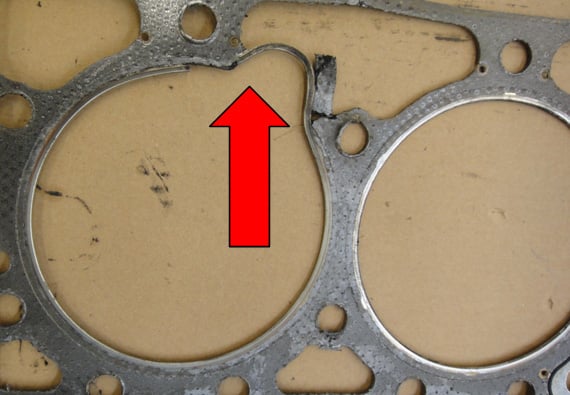 Both of these gaskets failed because of detonation that led to thermal push, causing the distortion on the gasket. Detonation itself is a combustion issue where the temperatures and pressure created exceed the components' ability to handle. It is a volatile and uncontrollable problem.

Combustion issues aren't the only thing that can cause your head gasket to fail. On the picture below, you'll notice measurements on the gasket that show the variations in head thickness. The lines on the gasket were probably caused the surface of the head being too rough. 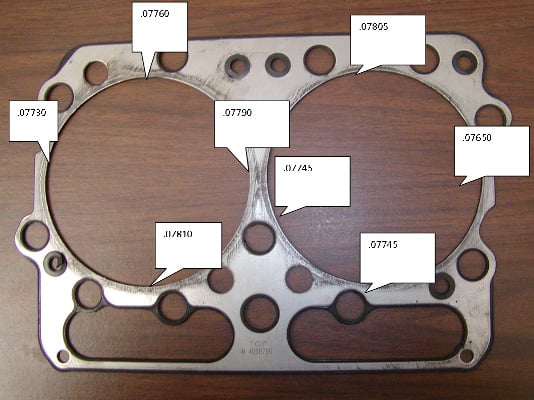 On the reverse side of the same gasket, no lines are visible, again pointing to an issue with the surface of the head. 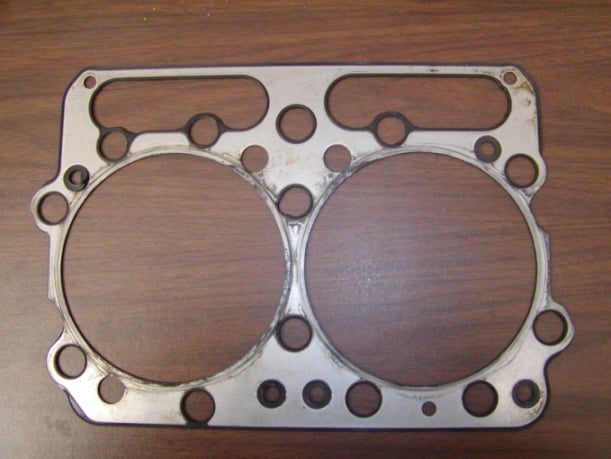 This gasket was found to leak water from the o-rings. When the gasket was examines, Red Silicone sealant had been used around the water and oil sealing areas. This is a liquid gasket compound that was used during installation. A compound like this prevents the gasket from seating correctly, creates uneven loading, and might lead to further problems on the joint and gasket. Using a sealant like this is not necessary, nor is it recommended, as it often leads to more problems. Because of its liquid state, it isn't compressible, and it lowers the friction and torque value. This all leads to further problems for your engine.

In general, it's best to avoid the use of sealants or adhesives on your gaskets unless the are specifically called for by the manufacturer.


Trying to diagnose the cause of your head gasket failure? Our certified techs can help you find the right parts to fix this or other diesel engine problems. Give them a call at 844-304-7688, or request a quote online.