WHAT IS A CORE CHARGE AND WHY DO I HAVE TO PAY IT? 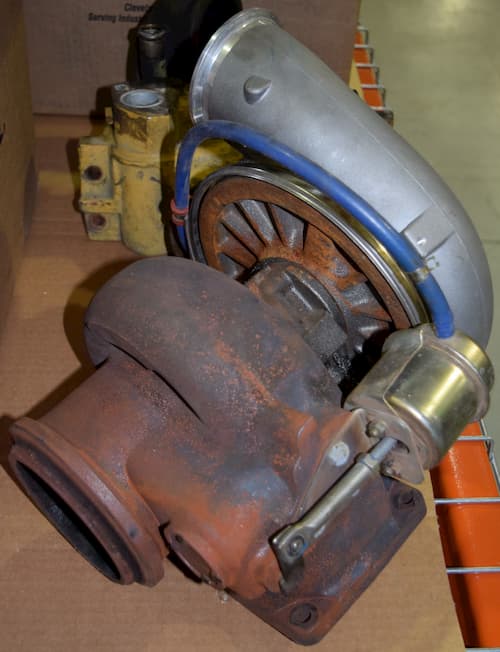 Considering how common core charges are in the diesel engine industry, a surprising number of our customers ask us that question every day. If you are also one of those people, we've put together this handy guide for something you should probably familiarize yourself with if you’re planning to buy replacement parts.

A CORE CHARGE IS BASICALLY A RANSOM FOR YOUR OLD PARTS.

A core charge is a fee you pay when buying a part, that will be returned to you when you send the old part you’re replacing back. So let’s say you buy a turbocharger for $1,000 and there’s a $400 core charge. You will pay a total of $1,400 upfront. When your new turbo shows up, you’ll take the box it came in, put your old turbo in it, and send that dirty, old part back to the manufacturer. When they get it, you should be credited back the $400 core charge, thus making your net payment only $1,000. It’s a monetary incentive to get your old part.

Why would any manufacturer want a broken turbo (or any type of part with a core charge)? Because that’s the only way they can make remanufactured parts. There’s a reason they’re ransoming your old part.

The core charge is an amount that can cover what it would cost for them to buy an old, broken part like yours. This way, they don’t lose out on the opportunity to remanufacture another part and sell it again. Essentially, you’re replenishing their stock, so that they can keep offering remanufactured parts. This is not only good for them, but for you, as it provides you with a less expensive alternative to buying new parts.

Or at least they shouldn’t. You might find yourself getting sticker shock when you see the core charge applied to your purchase, but it's important to remember one thing: if your core is accepted, you get the core charge credited back to you.

The only case where you would not get the core charge back is if you return an unacceptable core. Even then, most times the part cost and core charge still come to be less than the cost of a new part.

When buying an item with a core charge, check the manufacturer’s core return policy. Some manufacturers are more particular than others. For example, we source from one cylinder head manufacturer that has a 100% core return acceptance policy. This means that they will accept any used cylinder head you send back as a core, as long as it’s the same part as the one you bought from them.

But not every manufacturer has that policy. We also source from a fuel injector manufacturer that only accepts cores that have 3 main components in good condition.

Wondering if your parts will make a good core? Talk to our ASE Certified Technicians!

Give Us a Call!

As irritating as it is to not get your core charge back, it’s actually a good thing that manufacturers are picky about accepting cores. The remanufactured part business is based on having good parts to rebuild.

Going back to our fuel injector manufacturer, one of the main components that needs to be in good condition is the injector tip. Tips are one of the components that can’t and shouldn’t be remanufactured, because they need to be incredibly precise. If the manufacturer were less picky about what they accept, they would compromise the integrity of the parts they sell, and you would no longer be getting as good of parts.

In the market for a camshaft and wondering if your old one will be accepted as a core? Check out our guide, How Do I Know if My Camshaft is a Good Core? to learn more!

NEW PARTS CAN HAVE CORE CHARGES TOO.

It is rare, but it happens. Turbochargers that fit Cummins ISX engines pretty commonly have core charges whether they are new or reman. They do this so that they can begin offering remanufactured versions of them. After all, remanufactured parts would never be sold if cores were never returned for new parts.

Still have questions about core charges or your upcoming diesel engine repair? Our ASE Certified Techs are here for you! Give us a call at 844-215-3406. You can also request a quote online!