The History of Cummins

The huge company that is Cummins was founded almost a century ago in 1919 by Clessie Cummins. Cummins partnered with J. Irwin Miller, who helped Mr. Cummins grow his business. With Cummins’ diesel knowledge and Miller’s business expertise, the company quickly grew. In the years after World War II, the N-Series heavy duty trucks helped the company become an industry leader, and the company’s first overseas facility was built in Scotland in 1956.

”Cummins” is a name most of the population has heard of, whether or not they’ve actually seen a Cummins engine. This is because Cummins has done a lot to integrate itself into various areas of the diesel industry. In 1973, Cummins purchased Holset Engineering Co, which manufactured various engine parts. Holset today is most often associated with turbochargers, and the company’s name was changed to Cummins Turbo Technologies in 2006. Then, in 1986, Cummins began acquisition of Onan, a company that built generator sets. By 1992, the Onan was fully purchased by Cummins, and the company name was changed to Cummins Power Systems. In 1989, Cummins began working with Dodge Ram, which was Cummins’ introduction to the light and medium-duty market. Now, almost 29 years later, you will still find a Cummins engine in a diesel Dodge Ram. Finally, to complete its diversity, Cummins purchased Nelson Industries in 1999. The company name was changed to Cummins Emission Solutions to reflect the new ownership and the type of work it does. Having its toes in all of these areas has helped make Cummins a diesel superpower and a successful Fortune 500 company.

The “IS” in “ISX” stands for “interact system,” which was Cummins’ new fuel system for on-highway engine. This fuel system is a HPI (High Pressure Injection) system. It replaced the CELECT fuel system, and had much quicker processing and increased fuel efficiency from the old system. The other quality that made the ISX stand out when it debuted was the dual-camshaft system. One camshaft would be responsible for activating the injectors, while the other would be responsible for activating the valve train. This feature did not last the lifetime of the engine though, and the ISX became a single-cam engine in 2010. In 2002, the ISX received a new, cooled EGR (Exhaust Gas Recirculation) system that reduced the amount of NOx emissions made by the engine. 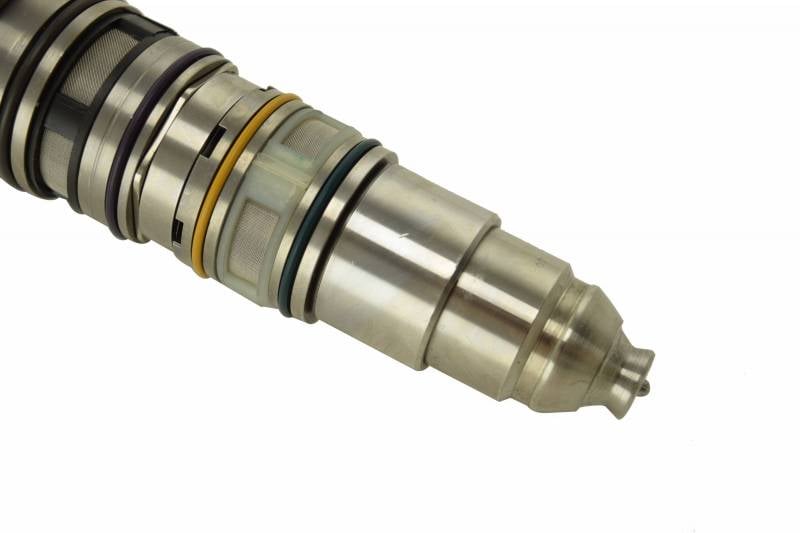 In its lifetime, the ISX has had quite a few changes made to its fuel system and injectors. The ISX CM870/871, for example is a dual-cam engine with mechanical injectors, controlled by a timing and meter actuator. This set-up was unique to the new style electronic control engine, and relied on the camshaft to create the high pressure injection.

In 2010, though, Cummins released the CM2250, which changed injection on the newer ISX models. This model removed the injector cam, and instead, the new, electronic injectors rely on the ECM to monitor pressure and timing. This is what's known as a common rail fuel system, providing better fuel economy and power.

These differences between engine models are one reason why it's essential to have your engine serial number with you as you shop for new parts. Injectors that work on one version of the ISX probably won't work on another, so you want to make sure you're getting the right parts the first time.

While the ISX can be a great engine, it does have its fair share of common failures. The most notorious issue is the VGT’s (Variable Geometry Turbochargers). VGT’s are an innovative idea that can have many benefits. However, they can fail easily and, when they do fail, are expensive to fix because the general practice is to replace them altogether.

Some other common issues are with the EGR system. Like every other engine with EGR, the EGR system is likely to cause a few problems. General symptoms are black smoke and power loss. The most common EGR problem on the ISX is a leaky EGR valve.

Another common ISX issue is that the camshafts tend to flatten out. The source of this, according to Cummins, was not the camshafts themselves. Cummins had a bad production of rocker arms that did not allow a proper amount of oil to be passed through them. This caused the rockers to stick and then slap the camshaft lobes. The only fix for this issue is to replace the damaged camshaft and all of the rockers; not replacing the rockers will only lead to your new camshaft also being damaged. Unfortunately, if you have a set of those affected rockers, there are no real symptoms to look for.

Think you might have one of these common ISX failures in your engine? Give us a call at 844-304-7688 and ask to speak to one of our certified techs to see if you have an issue and what we can do to help you avoid major engine damage.

Aftermarket Improvements of the Cummins ISX

As with every long-running engine, a good number of aftermarket manufacturers have begun developing parts for the ISX. As these manufacturers develop products, they also make design improvements to help the engine run better. One of these improvements was the development of an induction-hardened plateau-honed finish on the cylinder liners. This essentially means that the liners are already partially broken in by the time they are installed in the engine. This reduces oil consumption and the amount of metal particles in the engine after a rebuild.

Another improvement to the earlier years of the ISX is the introduction of one-piece FCD (Ferrous-Cast-Ductile) iron pistons. These are one-piece pistons that can replace the earlier two-piece pistons. They are more durable than the two-piece pistons, and exhibit better heat distribution. One important note to always remember when replacing or upgrading pistons is that they must be used in full engine sets; different types of pistons cannot be used in the same engine.

Aftermarket manufacturers have also developed the latest “top hat” style valve stem seal. This design combines both the seal and the valve spring guide into a single part. This development is more stable and improves oil control.

Finally, aftermarket companies offer the option for a pin and roller kit. This is not a technical development or improvement, but rather an improvement in product offering. By providing the option for a pin and roller kit, these companies allow consumers to save money by reusing their rocker arms. Often when rockers need to be replaced, it is just the roller that has actually incurred damage; the rocker arm itself is usually fine. By doing a little bit of extra work and replacing the pins and rollers in your rocker arms, you can save quite a bit of money.

We sell quite a few parts for the ISX, and some of our bestsellers are listed below. Please remember that when buying products from HHP, we always require a part number or engine serial number, depending on the product you wish to purchase. The products below may not be the right product for your specific engine.

3412277 | Cummins ISX/QSX Cylinder Head with Valves, Remanufactured
P131378R
This cylinder head is rightfully our best-selling part for the Cummins ISX. It’s a remanufactured head, which saves you money, but it will function like a brand new head. That’s because the internal components (like the valves, valve guides, springs, seats, seals, cups and camshaft bearings) are all brand new. Yup, you read that right. Plus, the remanufacturing process the rest of the head goes through ensures that it’s in excellent condition; it’s air decay and wet tested, the threads are all chased, and it’s finish machined. Our manufacturer uses magnafluxing to detect cracks and, if they find any, furnace welds them back to perfection. Basically you’ll only know it’s a reman part because we tell you.

4352290 | Cummins ISX 870/ ISX 07 Inframe Engine Rebuild Kit
P019199
Everybody loves a good engine rebuild kit, and this inframe one is especially popular. All parts in it are brand new, and there are ZERO core charges. The pistons are made from a heat-treated high-strength steel and were manufactured with state-of-the-art CNC machines. They are also the latest closed skirt design, so you get the most benefits from your pistons as possible. The cylinder liners in this kit are induction-hardened, which has improved their wear resistance. The main and rod bearings are made with a bi-metal blend that’s steel-backed for the most exact fitment, strength, and durability. The best part? The manufacturer on this kit provides a 2-year parts and labor warranty (not that you’ll need it).

4088665 | Cummins ISX Fuel Injector Remanufactured
P200202R
Fuel injectors are one of those special parts that you find remanufactured options for more often than new. That’s because, if remanufactured correctly, they work just as well as any new fuel injector. Just like our cylinder head above, there are so many new components in this fuel injector that it’s basically new. The actuator assembly, spill valve, solenoid, NOP spring, washer, shim, screws, and stop have all been replaced, regardless of how good of condition they were in when the remanufacturer received the core that they came from. The ISO 9001:2008 certified facility that remanufactures it also installs new filters and external o-rings, which give it the best seal possible in your engine. All in all, this injector is as good as it gets.

4352286 | Cummins ISX Inframe Engine Rebuild Kit Re-Ring, Less Pistons
P024183
A great rebuild option if you have pistons in good condition is a re-ring kit. This kit has the essentials for anyone that has reusable pistons and wants to save a few bucks. The piston ring sets have oil control rings that were designed with absolutely precise tangential tension, giving the rings the proper control they need. All gaskets are made with premium materials, and are organized into the different sets to save you the time of sorting them out. The fact that the main and rod bearings are made up of a tri-metal composition proves that it’s the little things that count. This kit also comes with the 2-year parts and labor warranty, just to prove that your satisfaction is our biggest priority.

4298626 | Cummins ISX/QSX Valve Camshaft, Remanufactured
P200048R
This valve camshaft is one of the two types camshafts in an ISX engine (the other being the injector cam). Actuating the valves is an important job, which is why we have carefully chosen the remanufacturer that we trust to rebuild this camshaft. A worn camshaft can reduce horsepower by up to 20%, and valve timing can be affected by as much as 3 degrees with as little as .001 wear. Luckily, our rebuilders carefully regrind the camshafts, paying close attention to the case hardening depths when large amounts of material are removed. Of course, that kind of precision is no surprise when you know that this camshaft was remanufactured in the USA.

Have any outstanding questions about the ISX or Cummins engines in general? Our techs have plenty of Cummins experience to get those questions answered. Give 'em a call at 844-304-7688 today! Are you looking for a part for your ISX? Be sure to request a quote online.