Are the OEM Engine Rebuild Kits Worth It?

Aftermarket parts are any parts that are not made by the company that made the original parts or engine. “OEM” stands for “original engine manufacturer” and refers to the company that originally made and/or sold an engine. For example, Caterpillar and Cummins are a couple major OEM’s in the heavy duty diesel world.

The usual assumption is that only the OEM’s can supply the right parts when you need to work on your engine, or that only they can supply quality parts. Aftermarket parts get a bad reputation for being junk, not holding up, or not fitting properly. But what really is the truth? There’s no denying that OEM parts will fit correctly, but are they really the only good option? 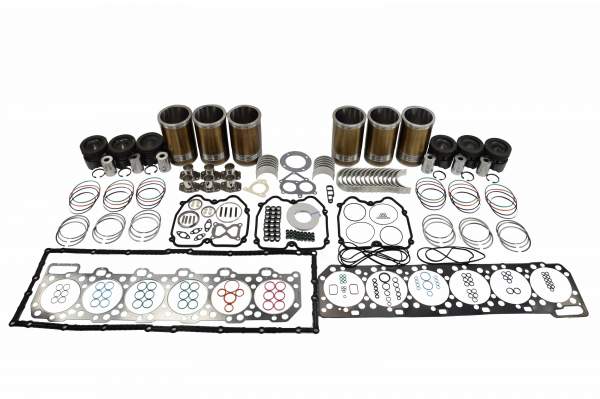 The biggest “advantage” of buying an OEM rebuild kit is that it contains the same parts your engine was built with, so you know they’re all good quality parts. You can buy parts for a repair and know that they will fit correctly. This gives you peace of mind, since rebuilds can easily get expensive. This reassurance is the main reason people buy OEM parts when fixing their engines.

OEM parts also usually have a warranty associated with them. Most OEM’s provide 6-12 month warranties, which is a decent length of time for a warranty, and which satisfies most people.

The OEM’s also tend to have good availability on parts for newer engines. In fact, they’re usually the only option for parts if your engine is very new.

The biggest disadvantage to OEM rebuild kits is that they are pricey. As we know from every other type of thing you can buy, big brands are (almost) always much more expensive than their aftermarket or generic alternatives. The diesel industry is no exception, and you definitely pay a premium for the OEM logo on the box your parts come in.

A big downside to genuine parts that most people don’t realize is that you won’t always get exactly what you think you’re getting. For example, Caterpillar cylinder kits come pre-assembled. They market this as a time-saver, which it is. However, this pre-assembly also hides the fact that the pistons in that cylinder kit may be used. Putting used pistons into cylinder kits is a common practice of theirs, but you wouldn’t be able to tell from the price that only half of the cylinder kit is brand new. They also don’t advertise this fact, so most people just assume all of the parts are new.

To get this out of the way, one of the biggest advantages of buying aftermarket kits is that they are almost always much more affordable than buying genuine kits. That aftermarket parts are cheaper is a pretty well-established fact, regardless of the type of part you’re buying. Take a rebuild kit for a Caterpillar C-15 ACERT for example. You can get a Gold Kit from the OEM for $6,552.68, including the core charge they charge you for the used cylinder packs. We offer the basic inframe kit for $3,107.95. To make this kit comparable to a Gold Kit, you’d also have to add the connecting rods, which we have new for $267.86 each, or $1,607.16 for all six. So the total cost of the comparable aftermarket kit for that engine is $4,715.11. That’s $1,837.57 less than the comparable OEM rebuild kit. And, if you’re a repair shop, the importance of pricing matters even more. While price is a huge factor when rebuild kits cost so much, there are many other factors to consider.

While this may sound odd at first, one of the advantages of buying aftermarket parts is that you can sometimes get the same parts that your engine came with. Yes, you read that right. While not always the case, if you buy from the right seller you can get the same parts that originally came in your engine.While OEM’s might manufacture the entire engine, that doesn’t mean all of the parts that go in that engine were made by the OEM. In fact, many of the components in a rebuild kit from the OEM are made by independent manufacturers. One of these manufacturers is Mahle. Mahle supplies pistons and piston rings to several OEM’s. Guess who Mahle also supplies pistons and piston rings to? Several aftermarket companies. This means if you buy from one of these aftermarket companies, you are getting the exact same pistons and piston rings that the OEM will sell you, just without the logo and the high price tag. (PS: HHP is one of those aftermarket companies.)

In addition, the aftermarket companies will only sell you rebuild kits with new parts. I’m talking all new parts. They won’t hide used pistons in their cylinder packs, they’ll just sell you new ones. After all, if you want used pistons, you can just buy a re-ring kit and use your own.

Aftermarket parts are also available for the older engines that the OEM’s no longer carry parts for. When the OEM no longer carries parts for your old truck or tractor, there’s a good chance an aftermarket company will.

All is not roses, and that’s why we have to disclose the ugly reality: there are disadvantages to buying aftermarket rebuild kits.

When buying aftermarket, don’t just buy any aftermarket rebuild kit. Not all manufacturers have the advantages listed above, and that’s why you need to be very particular about your parts supplier. A good parts supplier will actually make sure that parts from an aftermarket manufacturer are quality before they will sell them to customers. For example, HHP actually bought the cheap parts another aftermarket seller was advertising and tested them ourselves. We pitted them against similar parts from an aftermarket manufacturer we trust in the Ultimate Battle of the Parts. Those parts that seemed too cheap to be true? They were. That’s why HHP only sells from manufacturers we know and trust. We’ve done business with them long enough that we know their failure rates, what they’re good at, and if we need to avoid certain parts made by them. For example, some of our manufacturers make great gaskets, but not great pistons. We can get you gaskets from them, and pistons from another manufacturer that has better reliability.

There’s no denying the quality of OEM parts; they got their big names for a reason. However, if you don’t want to be overcharged and you have a good supplier, aftermarket is the way to go. You can get the same or better quality, with twice the warranty, at a fraction of what the OEM would charge you for the same parts. However, we cannot stress enough that you need to get the right supplier. A good parts supplier will find you those quality parts, and steer you away from the cheap manufacturers that gave aftermarket parts their bad reputation in the first place.

Want to know more about our aftermarket rebuild kits, or get quality parts at a lower price? Call Highway and Heavy Parts at 844-215-3406 or request a quote online today!