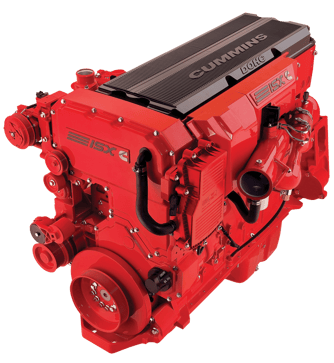 The ISX engine by Cummins is one of the most popular diesel engines on the road today. The first ISX was produced in 1998, as a response to the EPA's tighter emissions restrictions. It soon replaced the N14, the other workhorse engine produced by Cummins. Throughout its production history, Cummins has made various changes to the engine in order to keep up with the increasing restrictions, changing from a dual-cam to a single-cam and adding a cooled EGR system to reduce NOx emissions.

Despite its popularity, it does have its problems, like any other engine. Some of these issues depend on which version of the ISX you're running—obviously if you're running a pre-2002 ISX without an EGR then you won't be experiencing issues with the EGR. Here we discuss some of the problems you might run into with your ISX.

Is The Cummins ISX A Good Engine?

The engine is a workhorse but not without its issues. The Cummins ISX Engine first debuted in 2001 replacing the popular N14 Series. The Cummins N14 was a fantastic engine and beloved by diesel fans for many years.

As we mentioned, the EGR system was a newer addition to the ISX. Like any other engine with an EGR, the system can cause some problems. On the ISX, it most likely has to do with a leak in the EGR valve.

This is a difficult problem to diagnose, but monitoring the coolant consumption can help. If you notice that it's using a larger amount of coolant than normal, it's probably worth investigating further. Similarly, there might be a white residue left behind from the burnt coolant. This is another telltale sign of a leak. This kind of problem is more common on older style EGR systems, as many newer ones have tried to address and fix the issue.

Flattened Camshafts in the ISX

The ISX also has a history of camshaft issues. We discussed this briefly in Cummins ISX Engine Spotlight. In short, an ISX camshaft can flatten out. This is not because of an issue with the camshaft itself, but with the rocker arms. According to Cummins, there was a production of rocker arms that prevented proper oil flow, starving the components. These bad rocker arms stick and smack the camshaft, causing the lobes to flatten.

You can fix this failure by replacing both the affected camshaft and the rockers. If you don't correctly diagnose the problem and leave the faulty rockers, then the same thing will happen to your new camshaft. Apart from performance issues caused by a worn camshaft cluing you in to a camshaft problem, there aren't any particular symptoms to watch for that indicate whether or not you have these rockers.

This issue is usually found after a camshaft repair or overhaul, when the timing might be affected. When the engine was assembled, it was timed according to a certain procedure using timing wedges. This turned out to be kind of a crude way to time an engine, and Cummins found that through either sloppy procedures or worn tooling, the wedges had a tendency to wear. This changed the timing of the camshaft.

The system itself is very particular, and the change in timing can upset the balance in the engine. If fuel is injected even slightly late because of the camshaft timing, it would create conditions that allowed for the creation of soot. The soot would then contaminate the oil, creating buildup in the oil filter. This buildup causes oil pressure to drop.

One way to help diagnose this issue is to change the oil filter. If the issue seems fixed, then the engine needs to be retimed with a dial indicator. This is a fairly involved process and still requires the use of timing wedges. It's a very sensitive procedure that should be handled with care. It also might be diagnosable if you notice, or a customer calls and complains about, reduced oil pressure after new parts were installed or an overhaul was performed.

If you notice any signs of these issues, you'll want to address them right away to avoid further damage to your ISX engine. As we said, depending on your particular ISX, some of these issues might not affect your engine, so it's helpful to know what you have a single- or dual-cam ISX, as well as whether or not it has an EGR system. These can help you more carefully diagnose problems with your engine.

Do you still have questions about your ISX? You can speak with one of our certified techs at 844-304-7688, or you can request a quote online.