Why is My Diesel Engine EGR Valve Failing?

Do you know why you need your EGR valve? It's an important component of your EGR system that takes a ton of abuse because of its environment, and it's gotten a bad reputation over the years. People often choose to delete it because of the problems it can cause your diesel engine and VGT turbo. But, did you know that this can end up costing you more money in the long run?

Since being introduced into the diesel industry, the track record of the EGR valve hasn't been impressive. However, manufacturers are now building more durable and reliable EGR valves than in the past. And with better parts comes better service.

So, we're going to take you through the EGR valve and why it's important to keep it functioning on your diesel engine.

You can also watch our video on the topic:

Looking for replacement parts for your diesel engine? Our ASE Certified Technicians are ready to help you get exactly what you need!

Symptoms of a Failing EGR Valve 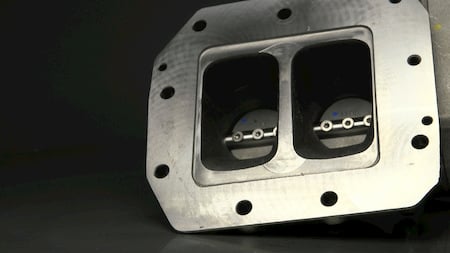 Since the EGR deals with exhaust gasses such as carbon dioxide and NOx, its has a good chance of getting damaged or clogged from debris over the years. That debris can also harm the other components in your diesel engine, which in turn will affect your overall performance.

Read our post to learn more about issues that can occur in your EGR system!


How Are These Symptoms Related to My EGR Valve?

The symptoms of a failing EGR valve are often the result of the valve being stuck open or closed because of carbon build-up. You'll notice different issues depending on which failure mode you're experiencing.

If your EGR valve is stuck closed, for example, the flow of exhaust gasses will be blocked. This creates an increase in nitrous oxide (NOx) gas, which results in engine knocking. 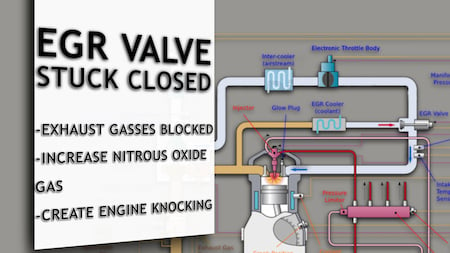 If the EGR valve is stuck open, you may experience rough idling, poor acceleration, or even stalling. When the valve is stuck open, all of the exhaust gas cycles back into the chamber, meaning there's not enough oxygen to allow for combustion to occur. Because of this, the air to exhaust ratio is compromised, and too much fuel will be induced into the cylinder. This produces even more carbon. That carbon can build up in the cylinders, cycle back into the EGR valve, or travel into the VGT and damage its internal components. 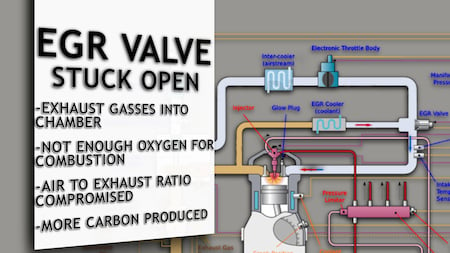 Having a carbon problem in your engine? Find out more about removing carbon from your diesel engine!

If you're dealing with either of these scenarios, you'll likely be faced with derated engine performance. The longer you run  your engine, the less power it will produce, until it can no longer run.

As a solution to these problems, you're faced with two options: replace the EGR valve and perform routine maintenance, or delete the EGR valve.

Why You Shouldn't Delete Your EGR Valve

Because of the issues caused by the system, it can be tempting to just remove the whole thing. But, there are some things you should consider before doing this.

Deleting the EGR Valve is a very risky move that can cause recurring problems down the road. First, it's illegal to remove or delete the component from the engine. The cost to fix the EGR valve correctly is cheaper than paying a five figure fine.

Modifying your diesel engine against OEM specifications can lead to harmful damage in the long run, that will come at a high cost. These engines are calibrated at a certain air, fuel, and NOx mixture from the OEM. When a component is removed or has failed, it creates a variable that will result in improper combustion, but it's even more likely to create carbon. That carbon can then travel downstream and damage components, such as the VGT.

Thinking about deleting? Learn more about why deleting your diesel engine EGR valve is a bad idea.

What Can You Do About Your EGR Valve?

Put in the time and get your EGR system cleaned out. Replace any component that has failed or is about to fail. This should be conducted on a regular schedule, as you would your oil changes or greasing your kingpins.

In the long run, this will help save you money and headaches!

Need help finding the right parts for the EGR system in your diesel engine? Call our ASE Certified Technicians at 844-304-7688, or request a quote online!