How a Bad Diesel EGR Cooler Can Impact Your VGT Turbo

We've been talking a lot about the various components of your EGR system, and why they're necessary to the proper function of your diesel engine. The EGR cooler is another part in the diesel EGR system meant to reduce NOx gas emissions. Its job is to pull as much heat as possible out of the gases before they're reintroduced into the combustion chamber.

But, over time, this part can fail. The results of this failure can damage a number of different EGR system components, including the VGT turbo. Most failures happen inside the EGR cooler, so it's easy to miss until symptoms start to show up elsewhere.

Don't let a failing EGR cooler keep your diesel engine down! We're taking you through what you need to know to keep your engine running at its best!

Make sure you don't forget to check out our video for more information!

Do you need a diesel engine EGR cooler? Our ASE Certified Technicians can help you find just what you need for your engine application!

What is an EGR Cooler? 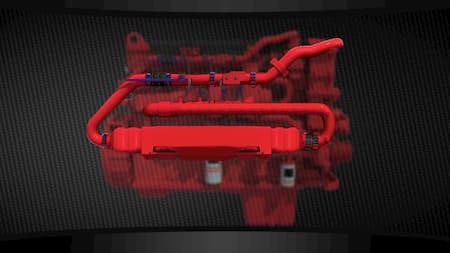 The diesel engine EGR Cooler, or exhaust gas cooler, is exactly what the name states. We want the air going into the engine to be as cold as possible to help support the combustion process.

With the clean air side of the engine, we have a charge air cooler. The air that's coming out of the turbocharger is being compressed and it generates heat, so we put it out in front of the radiator and we try and cool that air going into the engine. The cooler the air, the higher the oxygen content, and therefore a better combustion process.

It's a similar concept with the EGR cooler, except the fact that we've got exhaust coming out of the engine at extremely high temperatures.  We know we're not supporting the combustion process with the air we're putting back in, because it's already been burnt once and it really doesn't support combustion very well.

We're just trying to do that burning process again, but the temperatures are so high on it, they need to be cooled before going into the cylinder. This helps to get the oxygen coming in on the clean air side to be at the right temperature to support the combustion process. Essentially, we're just trying to pull some of the heat out of it.

Are you thinking about deleting? Learn why you shouldn't delete your EGR system!

What Are the Symptoms of a Failing Diesel EGR Cooler? 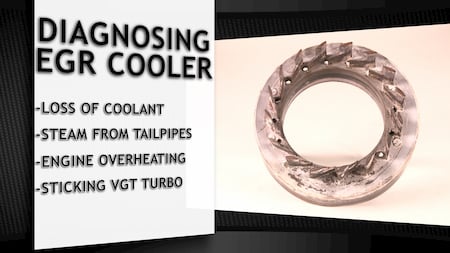 As we mentioned,  it can be hard to know that you're having a problem with your EGR cooler until you get symptoms occurring somewhere else in your engine. Here are a few things you can watch out for:

Not the symptoms you're experiencing? Check out our post on other EGR systems failures!

How Do These Symptoms Relate to My EGR Cooler?

Are you finding coolant in places other than your EGR cooler? If so, it's obvious that you have a leak inside the component. The tubes inside the EGR cooler that carry the coolant can break due to extreme temperatures, vibrations, and cycling of temperatures. Thermal expansion and contraction causes the materials inside to fatigue and fracture.

The coolant then can travel into the exhaust system and result in steam out of your tailpipes, mixing with soot and carbon gumming up the EGR valve, or contaminating components inside of the VGT turbo, causing the veins to stick.

Depending on the type of the EGR cooler, most of them will have tubes that run through it. At the end of each of the tubes, it's going to be either tig welded, soldered, vacuumed soldered, or some manufacturers will actually use a rubber grommet at the end of it that the tubes slide through. It will traditionally fail at this point.

In those bundles, the length of those tubes will be secured inside so they don't bounce around. If any of those weldment points cracks and breaks on that tube, then we have that coolant that's always under pressure coming out and causing further damage.

If the coolant leak isn't visible and you notice any of these symptoms, it's best to begin removing the plumbing around the EGR cooler to find traces of where it went internally. Again, look around and inside the VGT turbo for any gummed up components.

If your EGR cooler is giving you trouble, HHP can help! We have a selection of replacement diesel EGR coolers to help fix these symptoms. Have your ESN ready for faster ordering!

If you need help finding the diesel engine replacement parts you need, call our ASE Certified Techs at 844-304-7688, or, you can always request a quote online!