If you're experiencing problems with your common rail fuel injectors, you've probably noticed a difference in the way your diesel engine performs. And you're probably eager to get the issue taken care of.

But just what caused your injectors to fail? What is the specific issue that you're facing? Is there anything you can do to prevent it in the future?

We're taking a closer look at some of the common symptoms of common rail injector problems to help you get a better idea of what you're looking at.

Be sure to check out our video for more info on problems with your common rail injectors:

If you're looking for diesel engine replacement parts, our ASE Certified Technicians can help you get the right parts the first time! 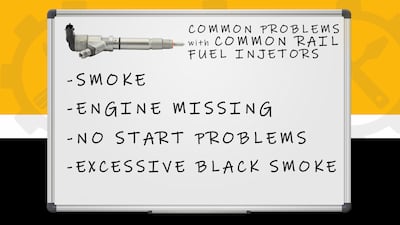 If you're having problems with your diesel engine common rail injectors, there's a few symptoms you might notice. These include:

Noticing any of these symptoms on your diesel engine? It might be time for new common rail injectors.  Take a look at our article on choosing the right injectors for you!

Depending on what issue you're experiencing with your common rail injectors, there are a few things that might be causing your problem.

Some of those problems, for instance, are caused by injectors sticking open. This is usually caused by water or dirt. You'll have no starts and you'll have a lot of black smoke with anything that's under the 5 micron or whatever spec your specific engine calls for.

If you have injectors that are just dripping, you'll probably have a light blue haze sometimes in idle. To get this tested, they can perform a leak test. This is something you'll notice happening frequently in Duramax engines.

A common issue on Cummins engines is the injector being stuck open. This can cause the engine to not start, and you'll just be leaking pressure by power loss. 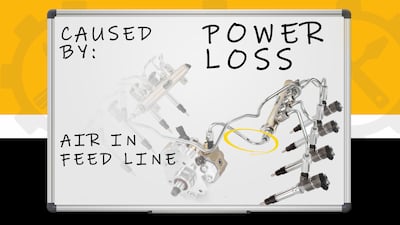 You can have injectors that aren't firing correctly. Or, you can have air getting into the system. So, if you've got a bad feed line going into your common rail pump, or even if you put a double o-ring on a fuel filter, it'll suck air from anywhere. You usually won't see a fuel leak from this, you'll just have a lack of power problem, or hard start problems.

High mileage is a big issue as well. If you get a lot of miles on an engine, eventually you'll have wear. The nozzles are going to wear. You'll see this on the valve sets inside of the injectors. They call it ball seat erosion. Over time, the pressure will actually cut through the metal of the injectors and it will leave little grooves, so your return rates will go high, or you'll have hard start problems with that.

What Can You Do About Common Rail Fuel Injector Problems?

A lot of common rail problems are caused by diesel fuel quality and operating conditions. Those are probably your two most common causes. To help ensure you get good quality fuel, we always recommend going to places that are high traffic. This way you know they turn over a lot of fuel, and it's not just sitting in tanks, getting water or other contaminants in it. 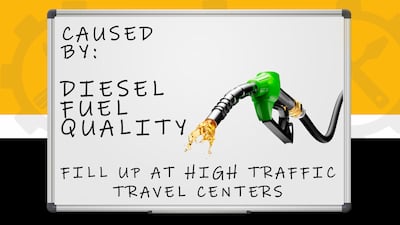 Diesel will also create moisture in a tank because of condensation. When you return fuel and it cools down, it creates condensation. So, you always have the potential to get some water in the tanks. It's always a good idea to drain your filter for that.

The first thing you should do if you're having any issues with your engine is to have it scanned. Have an authorized tech scan it and see if you're getting balance rates that are off, or if you're showing a code. Sometimes you'll get codes and sometime you won't. This depends on whether or not it's reading sensors.

It's important to have your problems properly diagnosed so that you can both fix the issue and prevent larger failures in your diesel engine.

Do you need to replace your diesel engine common rail injectors? Our ASE Certified Technicians can help you find the right injectors for your engine! Give us a call at 844-304-7688, or request a quote online!