We get a lot of questions from our customers—over the phone, on our social media, and on our YouTube videos. Today, we're going to be answering some of the questions that have come in through our YouTube channel.

You can also check out our video to see which questions we answered:

Do you have a diesel engine question for our ASE Certified Technicians? Give us a call! 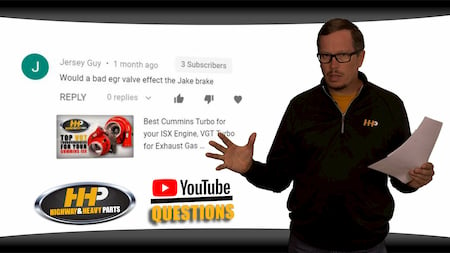 Well, that's a little bit complicated. In theory, the EGR system and the Jake brake system are two separate pieces to the puzzle, but they're all controlled by the engine controller. So, it might be possible that if you had a malfunctioning EGR valve that may derate your engine or reduce horsepower, that may affect your engine braking capabilities.

Your typical engine brake is going to be a situation where the ECM is going to open your exhaust valve on your compression stroke to release the compression from that cylinder and effectively brake the engine. Now, on some of these newer vehicles, you're getting into a situation where the VGT or variable geometry turbo is part of that equation. So, the VGT can close off its vanes and create back pressure in the exhaust system. So, if the engine isn't operating optimally, there may be some effects from your engine controller, saying "hey, we can't do this."

On another note, the EGR system takes your exhaust gases and runs it through a cooler, and that cooler sends that recycled exhaust gas back into the intake manifold. The theory with EGR is they need to control the combustion temperature. Too low, and you have particulate matter in your exhaust. Too high, and you have the NOx gases they're trying to get rid of. So, the EGR is controlling the combustion temperature.

But, if you have something go wrong with your EGR valve, maybe your EGR cooler fails, that comes in through the intake manifold and out the exhaust, directly into your VGT turbo. So, the potential there is that the VGT turbo may not be able to function properly based on carbon buildup or debris hitting it, and that could ultimately affect your engine braking.

Want to know more about your EGT and VGT? Check out our article on how a bad EGR cooler can affect your VGT.

Next, Udo Bruning says that they have a diesel common rail engine, with new OE injectors and a reconditioned cylinder head, but on idle after 5 minutes, it fills the sump with a gallon of diesel. There are no leaks on the fuel rails or injector piping. What could be going on?

Well, without more information, it's going to be kind of difficult to say what the specifics of this one are. But, basically, when you're talking about fuel contamination in your engine oil, there's a couple places you could get it.

You can get fuel contamination from an over-fueling injector, so you could possibly have a bad injector right off the bat. Any injector seals or o-rings can leak into the crankcase. Any of the connection tubes or lines can also leak. A lot of times, the injector goes in and there's a connection tube that comes in to feed the high pressure fuel to the injector. Often, those injector tubes are one time use. So, that could potentially leak. The other thing is any type of supply pump or transfer pump that would be driven off the crankcase or camshaft could leak into the crankcase as well.

So, it's hard to say without more information, but those are all places that you could get fuel in your crankcase. One other possibility is if you have an engine where the rings are just not sealing and it is not firing that cylinder. It might be getting fuel past the rings down into the engine. When we're talking five minutes with a gallon of fuel, it should be pretty easy to see where that's coming from. Potentially, put some fuel dye in that fuel and run it for just a little bit and check where the dye is coming out.

Looking for more info on fuel contamination? Read our failure analysis dedicated to the topic!

The next question comes from JackKnife TV, who says that the engine makes partial boost, and then out of nowhere it'll climb up to 40 PSI where it's supposed to be. You can even hear the difference. Could this be related to an actuator that isn't moving or vanes getting stuck?

It's going to be related to your turbo, most likely, but there's a couple different things that could be going on there. Typically, if an actuator fails, it just doesn't move. It's not intermittent. So, you can probably rule out a completely failed actuator.

But, if you get vanes that get carbon and debris built up on them and they stick, or maybe your nozzle ring gets some damage to it, that might make it so the actuator may have a hard time moving it and it may act erratic.

So, it's very common to have fuel system issues or EGR issues cause excessive combustion gases along with potential coolant from maybe a failed EGR cooler that build up debris on the working components of your turbo. It gets them either sticky or damaged from that situation.

The other possibility could also be your ECM. It controls your turbocharger and it reacts based on sensors that are feeding input into the ECM. It takes that input and makes adjustments. So, you might have a sensor that is sending erratic signals. But, most likely this problem is going to be related to your turbo. 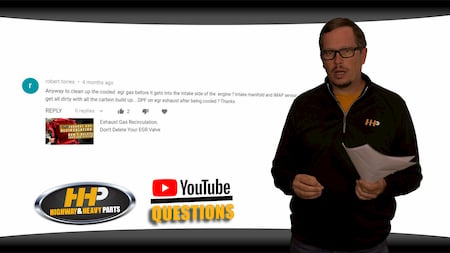 We also heard from Robert Torres, who wants to know if there is any way to clean up the cooled EGR gas before it gets into the intake side of the engine? The intake manifold and IMAP sensor are getting all dirty from carbon buildup. Maybe a DPF on the EGR exhaust after being cooled?

For instance, we have customers that have regularly scheduled maintenance programs that they clean their DPFs and DOCs. They take their EGR system completely off the engine, clean it out, and make sure everything is operating optimally. Sometimes they do this multiple times a year. They say this reduces their overall maintenance costs. That could be half the battle.

You also want to make sure you're doing your maintenance on time, using the proper oil, and changing your injectors before they fail. Injector failure can take a while, as the holes get larger in the injector and they don't atomize as well. Your combustion process won't be as clean, which leads to all the excessive build up of carbon.

Thanks for sending in your questions! Keep watching and reading to get more questions answered.

If you have a question for us, feel free to send it our way!

Do you have a question about your diesel engine?  Call our ASE Certified Techs at 844-304-7688. Or, you can request a quote online.