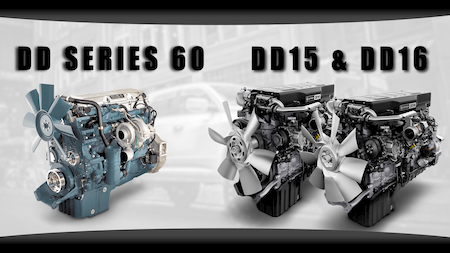 Diesel Common Rail Fuel Injection Systems are becoming more and more popular in heavy-duty diesel applications. We get a lot of questions about the differences between the common rail system and the older EUI mechanical injection system.

In this post, using the Series 60 and DD15/16 engine platforms as examples, we're going to give you an overview of each of these systems, clarifying the differences and answering questions you might have.

Looking for more information? Check out our video:

Interested in fuel injectors for your diesel engine? Our ASE Certified Technicians can help you get the parts you need!

What are the Differences Between the Injectors? 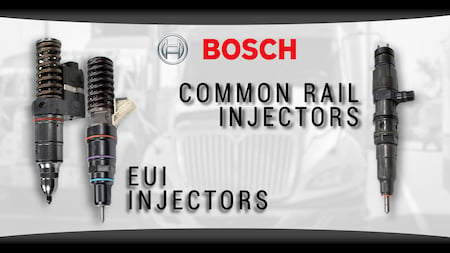 In this section, we'll take you through the defining characteristics of each type of injector, as well as the differences between the fuel injection systems.

The Detroit Diesel Series 60 engines were produced from 1987 to 2011 in various engine displacements. Later model Series 60 engines utilized the EUI Injection System. While this system had many advantages over conventional injection systems at the time, like improved power, better fuel efficiency, and less vibration, it still had its downfalls.

EUI injectors require more moving parts to inject fuel, making them less efficient and more prone to failure. The camshaft activates a mechanical pump that creates fuel pressure to actuate the injector. This method requires the mechanical operation of six rollers, six rocker levers and rocker shafts, and push tubes just to deliver fuel.  All these components have a surface area and wear points that require lubrication and maintenance.

Camshaft timing isn't variable, either. It actuates the rocker arm at the same time, every time. Therefore, the fuel injection pressure varies with the speed of the engine. The loss of pressure after each firing event causes a lag between firing, which reduces combustion efficiency.

This can result in soot and particulates in the exhaust and deposits in the engine. Even though the high-pressure solenoid is controlled by an ECU to determine the amount of fuel and timing of injection, it isn't nearly as adjustable as on the common rail system.

Want to know more about the history of the Series 60? Take a look at our Series 60 Engine Spotlight.

The Detroit Diesel DD15 and DD16 engines have been produced since 2007 and 2010. The DD15 was the first commercial vehicle to employ the Common Rail Injection System. This system consists of a high-pressure pump, injectors, a rail, and an electronic control unit. This new system overcame many of the pitfalls of the EUI system.

First, and perhaps most importantly, no camshaft is required to actuate a common rail injector. This means you don't have to rely on a camshaft, rocker levers, rocker shafts, rollers, or push tubes to get fuel. Instead, the common rail system relies on a high-pressure pump to activate fuel delivery.

The high-pressure pump eliminates the wear and tear points inside the engine, making the common rail system less prone to failure. The fuel is pumped into a high-pressure rail, connected to the injectors, where it's stored and maintains a constant pressure of up to 40,000 PSI. This allows for instant injection and faster ignition through a finer spray of atomized fuel.

The fuel injectors work in parallel with the fuel pump, which controls the timing of the fuel injection and the amount of fuel injected. The ECU also provides greater control over fuel volume and injection timing.

The multi-fire injection capability of the common rail system can fire multiple times during the piston cycle, providing a cleaner, quieter burn.

The common rail system can generate up to five injections of fuel per combustion cycle. One combustion cycle comprises of the intake, compression, power, and exhaust, within two crankshaft revolutions. Two revolutions at 2,200 RPMs take about 55 milliseconds. That ends up being five times faster than the blink of an eye.

Spraying atomized fuel at that speed, in conjunction with the other processes that take place to make that happen, requires extremely precise, technologically advanced components.

That's why Highway & Heavy Parts only sells aftermarket parts from vendors with the highest quality standards and trusted reputations. And we're proud to sell parts from an industry leader like Bosch.

Advantages of the Common Rail System

On engines like the Series 60 that use a camshaft to generate pressure to inject fuel, there are multiple moving parts required for the camshaft to deliver fuel. The DD15/16 engines, on the other hand, utilize the common rail system with fewer moving parts.

Advantages of the common rail system over the EUI system include:

The common rail injection system drastically reduces the likelihood of failure, because it's a cleaner, simpler, and more efficient fuel delivery system. This ultimately results in a lower cost of operation and ownership through the long-term durability and reliability of the engine.

Looking for more information on these injector types? Check out our article on the differences between common rail and unit injectors.

Highway & Heavy Parts sells Genuine Bosch EUI and Common Rail Injectors for Detroit Diesel Engines. Our injectors meet or exceed OE specifications for up to 50% less than the OEM, and they're backed by a one year, unlimited mileage warranty. At HHP, we take the risk out of buying parts.

Looking for Genuine Bosch Injectors for your Detroit engine?  Give our ASE Certified Techs a call at 844-304-7688. Or, you can request a quote online.