Cold Coolant to a Hot Engine

In this we see the results of cold coolant being added to a hot engine. The pictures show the discoloration on the pistons caused by this.

These pictures show the various effects of overheating and detonation on your cylinders. The initial picture on the left shows scoring on the exterior of the piston, and the one on the right is the inside of the liner, similarly scored.

The below picture is of the piston crown, and, as the arrows indicate there is both a crack and a hole in it, as well as obvious signs of a fuel pattern. 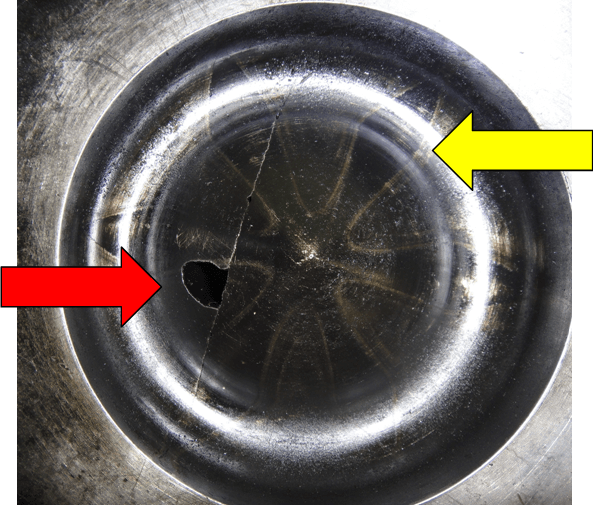 Overheating caused the extreme scoring, while the crown damage is likely from detonation. Because the spray pattern is so close to the center, a timing issue or damaged injector is likely the problem.

The next pictures show the bottom of the piston. There is heavy discoloration on the pin and a dark, burnt area under the crown.

Because there is no obvious injector pattern, it probably didn't overheat from a bad injector. 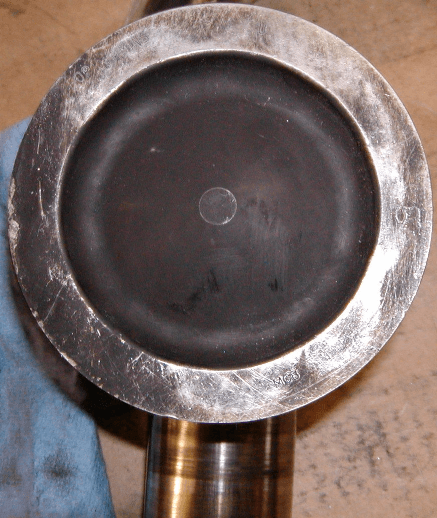 Because of the good condition of the rest of the cylinder kits, it's not likely that an injector caused this particular issue. Instead, a lack of lubrication is likely the culprit. Because the piston is cooled from underneath by the piston cooling nozzle, your nozzle should be checked for damage. Also, ensure that you're using the right kind of oil for your engine and that oil pressure is where it should be.

Here we see more discoloration on the crown caused by overheating. 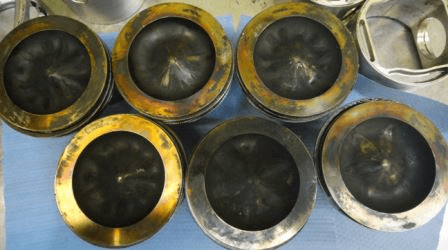 Upon closer inspection, the underside of the piston crowns is burnt as well. 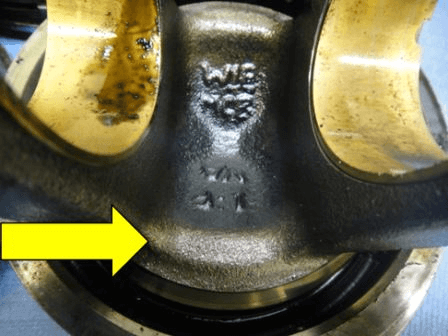 Since the tops are blue and the bottoms more burnt, it's likely that this failure was caused by both overheating and a lack of lubrication caused by low oil pressure.

Here we see burnt oil left on the underside of the piston crown.

The next pictures indicate insufficient lubrication, because of the faint discoloration on the pin and the fretting on the bearings. 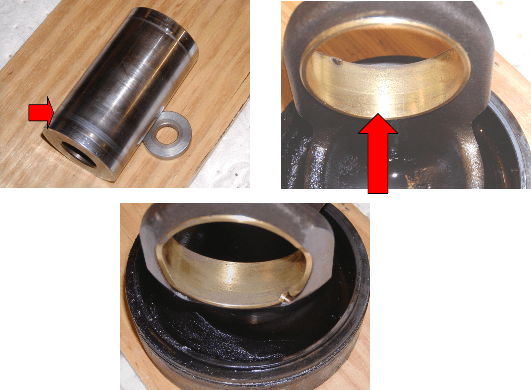 The next images of discoloration is likely from extreme overheat.

As the pictures show, the cause of failure seems to be overheating of the piston crown, leading to the over expansion of the crown and skirt, and the scoring on the cylinder kit. Because it is a single cylinder failure, it's likely due to a damaged or plugged piston cooling nozzle.

The pictures below show heavy carbon deposits on the piston crowns. You can see valve impressions in the buildup.

Below we see evidence of carbon cutting and blow by on the compression rings.

These next pictures show a bent piston pin retainer. It is bent on the edge and not properly seated. The cause of failure would be from an oil leak out of the retainers overcoming the piston rings and creating an external fuel source. The oil loss would negatively impact the lubrication necessary to cool the underside of the pistons. This combination led to the eventual overheating and seizure of the piston. 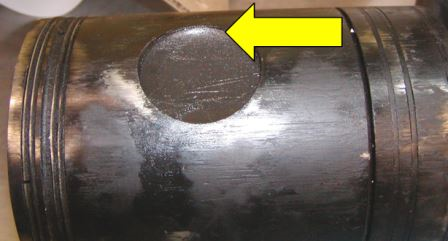 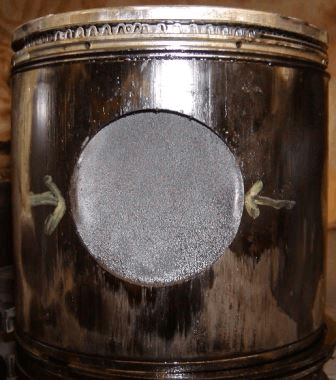 The below picture shows evidence of an uneven injector spray pattern.

A bad spray pattern or timing error is likely the reason behind the deterioration of the edge of this piston crown. 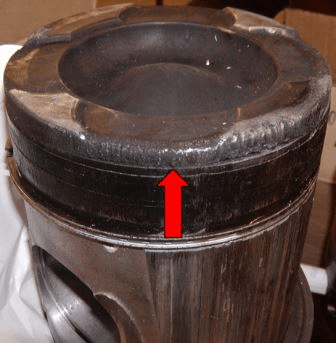 Here, a bad injector tip sprayed fuel out of the combustion bowl. It hit between the crown and liner, which burned through the piston. 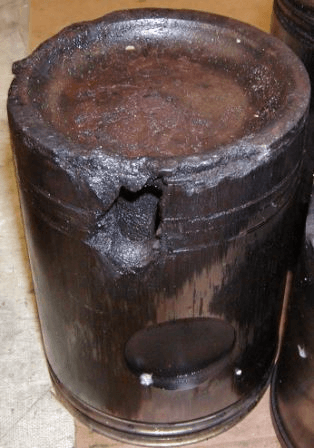 The damage below is again due to a faulty injector spray pattern. 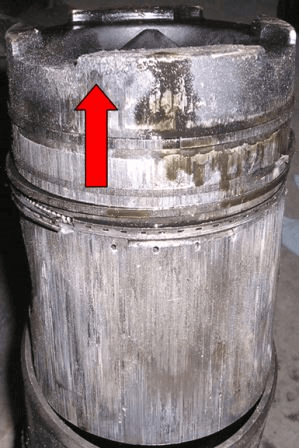 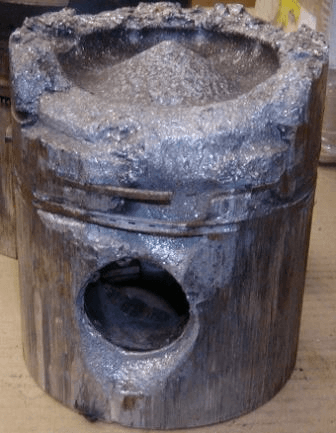 The image below again depicts extreme damage caused by fuel. 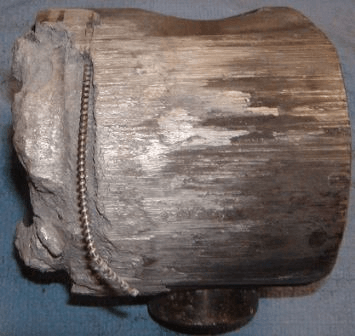 Below we see burning and discoloration from overheating. Because no spray pattern was detected on the crown and the piston pin and bearing have normal wear, the damage to the underside of the crown indicates low oil pressure. However, it could also be caused by incorrect timing. In this picture, the valve marks on the crown indicate that the issue is indeed caused by a timing problem.

The following pictures show scoring on the liner and skirt from expansion. 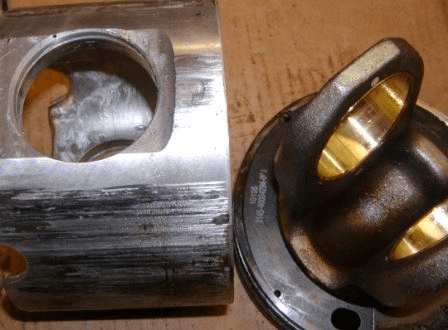 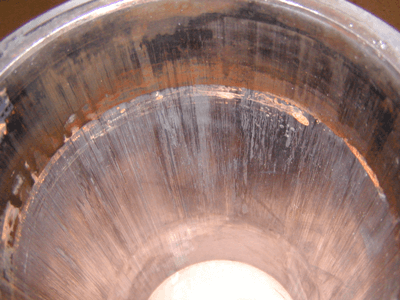 These last pictures point to the contact marks on the crown of the piston.

These next pictures give examples of quarter point scuffing, where the pattern on the top of the piston looked normal, and the underside of the piston was clean as well. This indicates that a lubrication problem was not the cause, but rather a cooling system failure and possible air entrainment was more likely to blame. 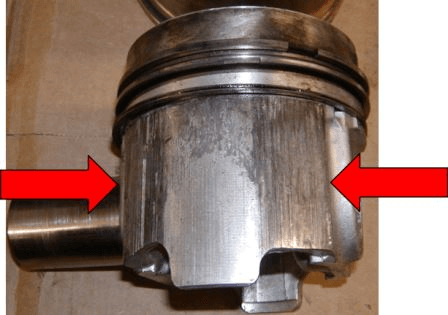 Below is a view of the thrust side of the piston. 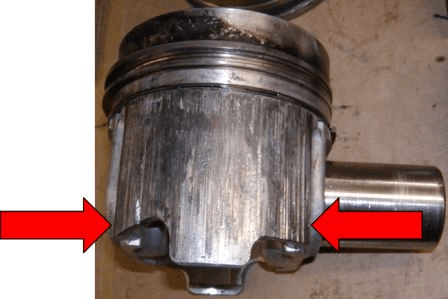 The next picture shows the piston crown discolored by excessive combustion chamber temperatures. This could be caused by improper engine timing or the wrong fuel mixture, particularly in a natural gas application. 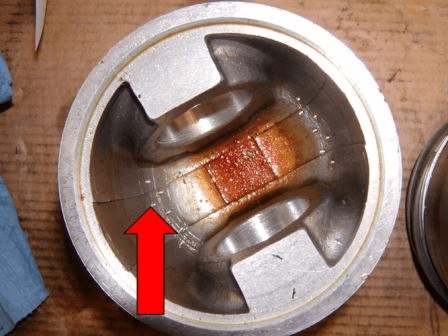 This last picture shows where the crown began to melt from the overheating. 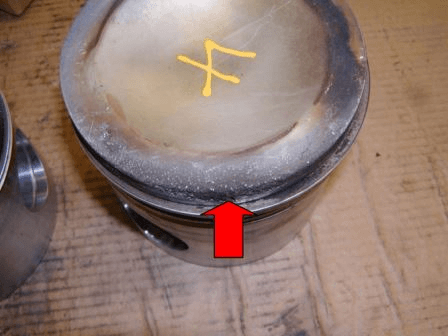 Need help with your piston crowns, or any other part of your diesel engine? Call us at 844-304-7688 to speak with a certified technician, or request a quote online.