Have you ever thought much about your ESN or why you might need to know it? Diesel engine serial numbers are vital to ensuring you're getting the right fit for your engine. 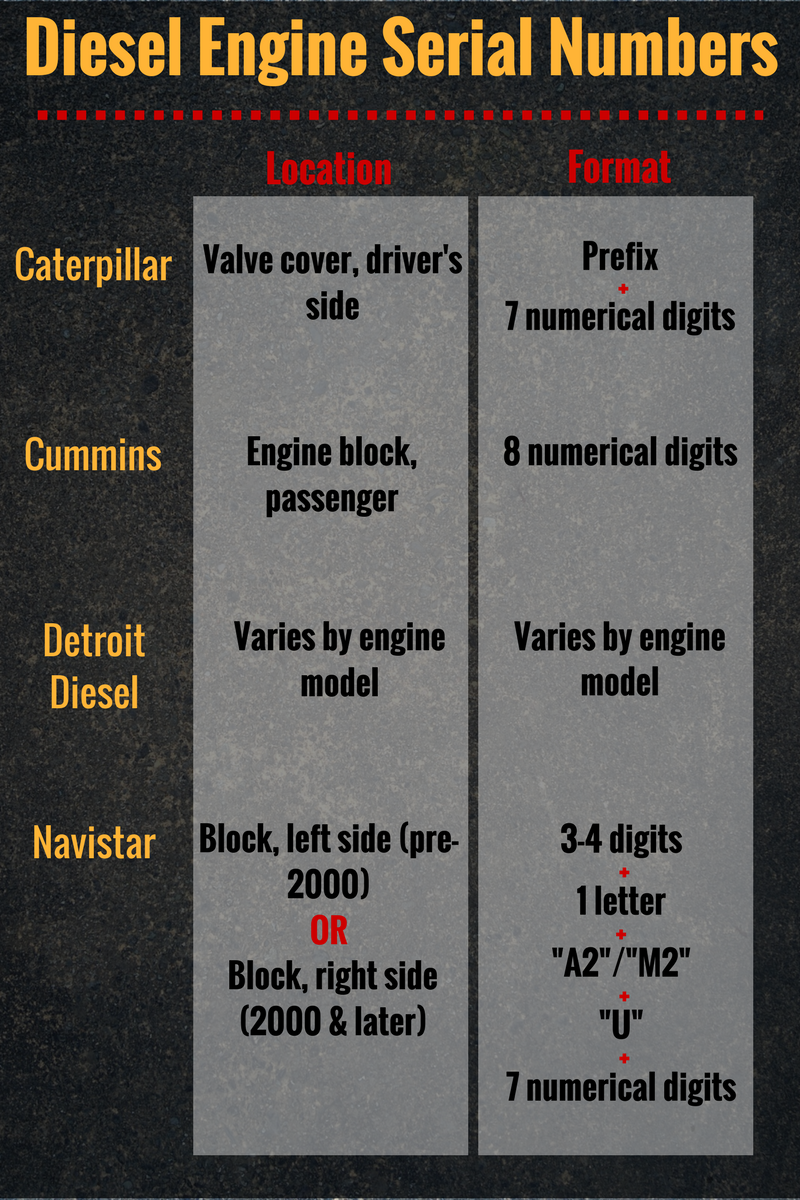 This post will take you through some of the most popular diesel engine brands and where their engine serial numbers are located.

How to Find Your Diesel Engine Serial Number

Sometimes it can be hard to find an ESN. Below we've collected the general formats your ESNs will have and where you can find them on your engine.

Have questions about finding your ESN? Call our ASE Certified Staff!

All Caterpillar ESNs have a similar format. They all begin with a three number/letter prefix, followed by 7 digits. The prefixes will correspond to a particular model. For example, prefixes of 1LW, 2WS, 5DS, 5EK, and 6TS indicate that the engine is a 3406E. For the more popular prefixes, people will refer to their engine by the prefix rather than the model. You may have heard someone say, "Oh, yeah, my 6NZ runs like a champ." A 6NZ is a common prefix for a single-turbo C15. Some prefixes' reputations precede them. For example, a C15 with a prefix of MBN is known as a "Bridge motor" (because it was the bridge engine from the mechanical C15 to the electronic C15 ACERT), and is often heavily critiqued.

If you don't have your owner's manual and don't have access to Quickserve, we have the locations for the dataplate on some of the more popular engine models.

Unable to find the dataplate or don't see your engine model listed? It's okay. Cummins also stamps the engine serial number into the passenger side of the engine block for all models.

Cummins engine serial numbers look more like a classic serial number than Caterpillar ESNs do. They are composed only of 8 numbers. They're in a specific numerical sequence, based on which engine came off the assembly line first. There is no special designation for particular models.

Cummins engines do have something a little unique, called a CPL. This stands for Critical Parts List and, as you can probably guess, is a list of the critical parts of the engine. There are fewer CPLs than ESNs because multiple engines can have the same CPLs. For most major parts of an engine, you can give us a CPL rather than an ESN.

We could (and did) write an entire blog on where you can find your Detroit Diesel engine serial number. Detroit is notoriously inconsistent when it comes to ESN placement. While the locations you can find your ESN are often consistent across a model, they aren't always, so don't panic if you go to look in the spot listed below and don't find it. It'll be on the engine somewhere, so just keep looking.

Thankfully, the format of Detroit engine serial numbers is more consistent than their location. It can still get rather complicated though. For the sake of keeping this guide simple, were just going to go over the highlights.

Navistar engine serial numbers are probably the most informative of all the ESNs for the major OEMs. They have a specific format that will provide the engine model, configuration, application, country of origin, and unit number. 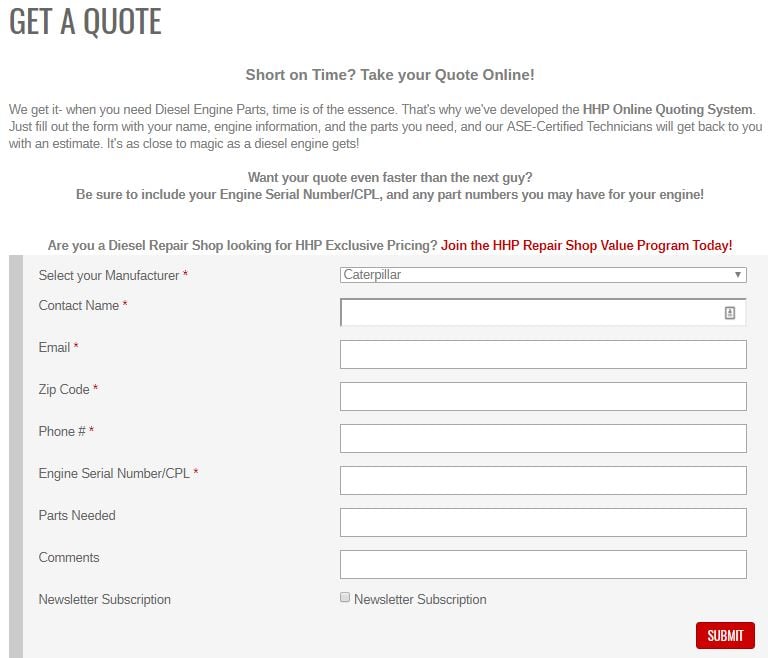 Long, long ago in a time before electric cars were even conceived, heavy duty diesel engines were first made. These engines were not like mass-produced automotive vehicle engines. There was no standard Make-Model-Year formula that magically gave all engines with the same model name the exact same parts. No, they were special; each individual engine was different as it came down the conveyor belt.

And apparently the manufacturers didn't think about what a pain it would be in the future when you need to order parts for repairs.

Because of the lack of foresight, finding parts that correctly fit an engine can be incredibly complicated. Engine serial numbers are important because they are the only guaranteed way to find the exact parts that an engine was built with. Usually, if you're buying a single part, providing the part number off the old part will also work. However, if you're looking to get an engine rebuild kit, we will always ask you for an engine serial number. This might seem excessive, but when it comes to an expensive kit with a lot of parts, we want to make sure you're getting the right thing. So, whether you're calling us or using our online quoting tool, be sure to provide your engine serial number.

When calling to order parts, we get some people that want to give us VINs (Vehicle Identification Numbers) instead of ESNs. Unfortunately, a VIN is different from an ESN. We are able to look up some VINs to find their coordinating ESNs, but this is not a guarantee. Depending on your vehicle, you can always use our VIN Decoder Resource Guide.

Anything this didn't answer for you? Our experienced techs are on hand to answer your questions. Give us a call at 844-304-7688 to get your questions answered!