Were here to talk about fuel injectors today. Well be breaking down our most commonly asked questions.

We get a ton of calls about injectorsall sizes, all kinds of engine typesand we're bringing you answers for the ones we hear from customers the most. Are you wondering why your diesel injectors are failing? What's the difference between new and reman? Will your old injector be accepted as a core? Well be covering your questions down below!

Want help with your fuel injector? Our ASE certified techs have answers for you!

Why Are My Injectors Failing?

This is perhaps the question we get the most. And there's not just one answer for you.

The injector can fail a couple of different ways. It can fail electronically, on the solenoid on the top of the injector, for example. But it's not just electrical failure you need to watch out for. It can also happen mechanically. All these injectors for the most part will have some sort of electronic control, aside from the ISX which is a mechanical injector. The injectors are still mechanical on the inside, though, and are susceptible to debris, water, and contamination. With failing injectors, contamination is the usual source.

You can have something thats just plain worn out too. You may have a million miles on it and high pressure inside the injector has caused clearances to expand. Maybe you have more leakage than ever before. So theres multiple ways an injector can fail. 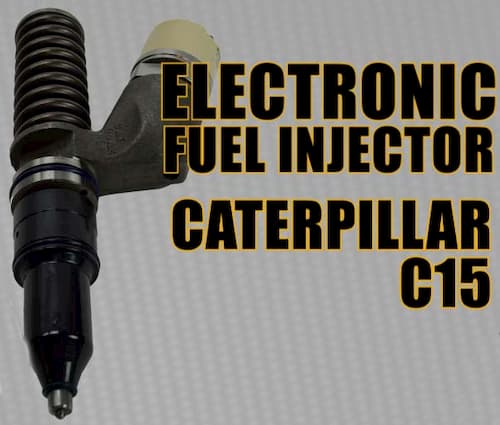 10R1000: Caterpillar C15electronically controlled, actuated by the rocker lever, run off the camshaft

Should I Add New Injectors During A Diesel Engine Overhaul?

Lets say you're doing an inframe overhaul kit and you're getting all new parts in the engine. You may find yourself wondering,"Is there any kind of benefit to getting new injectors in my engine?" The short answer is absolutely.

One of the things to keep in mind is these injectors have very tight tolerances in them. Over time, during normal wear and tear, those tolerances will increase ever so slowly. Its probably not something you'd notice because its easy to compensate for when you're driving down the road. Your foot just goes a little bit further into the gas pedal.

The tip of the injector where fuel is released has many tiny holes. Over time these holes will get bigger causing the fuel to not atomize as well. So instead of getting that fine mist of fuel, youre getting droplets, and the droplets dont burn as well. So your foot goes to the floor a little bit more.

When you replace the injectors and everything is tightened up, the tolerances are good, and it's flowing with the pressure that it's supposed to, you're going to be off the gas pedal to make the same power. This leads to better fuel economy. So its a good idea to freshen up your injectors when youre doing your engine, hopefully bringing some of that fuel mileage and power back that you used to have.

For more information on injector failure, check out our previous article, Fixing the Problem: Identify and Replace Faulty Diesel Injectors!

How Does a HEUI Injector Differ From A Regular Injector?

Something else we get a lot of questions on is the HEUI injectors. So just what is the difference between a HEUI injector and a regular injector?

A HEUI (Hydraulic Electric Unit Injector) injector is commonly used on your Fords, Navistars, and some Caterpillar engines. Essentially those HEUI systems are taking engine oil and running it to a hydraulic pump. That pump is creating high pressure to actuate that injector. Thats whats actually forcing the fuel out of the injector versus an ISX where a rocker arm pushed the injector, creating pressure.

Whats The Difference Between A New And A Remanufactured Option?

Weighing your options as you shop for injectors for your diesel engine? Here are some things to consider as you look at our selection of new and remanned injectors.

First of all its pretty rare to see a brand new injector. If it is available, the price is usually through the roof. So thats why its a viable option to go with remanufactured fuel injectors.

During the remanufacturing process, injector parts are cleaned or replaced, making them perform as if they were new again. This makes them available for a fraction of the cost. Very rarely do we see a new option.

If you're looking to install a set of injectors, check out our blog! 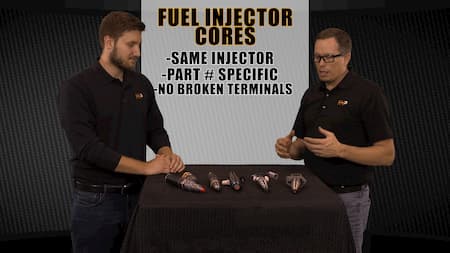 So just what makes a good core? Here are some things to think about when you're getting ready to return your cores.

Obviously, the injector returned has to be the same. If youre sold a HEUI injector, returning an ISX injector will not result in a good core. Some of the injectors need to be part number specific. So if we sell a 10R1000, we need a 10R1000 back.

There are a few other basics for the cores. It can't have broken terminals, whether that's a side terminal on a 14L, a terminal on the top of a 10R1000, or it's a terminal on a HEUI injector, they can't be broken.  You also cant have broken springs, or smashed tips. Those are the 3 main things you see with the fuel injectors that if you see, plan on paying for a core.

The majority of the time, if youve got a running engine and youre taking out a set of injectors, you're going to get a good core! Thats because it was a running injector when you took it out and you haven't disassembled it or taken it apart.

Of course, when we send you a set of injectors, we're also going to send a prepaid label to send the cores back. Just put them back in the original boxes, box 'em up, we try and make it as simple as possible for those core returns.

So there you have itanswers to some of the questions we hear the most. If you still have questions about fuel injectors, we have certified techs on staff who can help you out!

If you need injectors, or just have questions about injectors, give us a shout at 844-447-1453 or request a quote online!

From diagnosis to delivery, were Highway & Heavy Parts!